Last month, Google started rolling out the much-anticipated Page Experience Update on 15th June, but Google has been very busy. There are five other updates in play that may affect website ranking:

This means there’s even more to look out for and understand than just Core Web Vitals and the rest of the Page Experience Update.

Let me try to pick apart what’s going on and pinpoint which ones may affect your site and which ones you can forget.

Google plans to change its search algorithm to prevent websites, which operate under domains like BadGirlReport.date and PredatorsAlert.us, from appearing in the list of results when someone searches for a person’s name.

It won’t affect you unless you own a particular type of website.

At the time of the update, Google wrote How Google updates Search to improve our results.  It’s worth reading, but for what we’re talking about here, this is what you need to know:

Delivering great results at this type of scale and complexity requires many different systems, and we’re always looking for ways to improve these systems so we can display the most useful results possible…

Periodically, we make more substantial improvements to our overall ranking processes. We refer to these as core updates, and they can produce some noticeable changes — though typically these are more often noticed by people actively running websites or performing than ordinary users.

How Google updates Search to improve our results

Inevitably, some sites perform better and others worse following the update.

So we had the June Core Update finishing and the Page Experience Update taking off, then on 23rd June, along came the first of two so-called Spam updates. Google outlined its intents in Webspam Report 2020 published in April of this year.

These updates are designed to identify and downgrade spam content to protect searchers from content with malicious intent. Hopefully, these updates won’t apply to your site.

The second spam update rolled out on 28th June. If either update has affected you, you would have probably seen it quickly; both updates had a fast roll-out.

As if that wasn’t enough, Google rolled out the July Core Update straightaway on the 1st of the month. Google said it would take between one and two weeks, so it should be done (or just about done) by the time you read this.

What you should do

Unless you’ve taken a massive hit in traffic, you need to hang on for a couple of weeks after the loss. Things often sort themselves out. The number of sometimes overlapping updates has been causing a lot of decreases and increases. Don’t forget that some sites will be seeing traffic increases.

If you have a site with great content—quality content, as always, can override just about anything else in search—and your site is set up correctly for SEO, then there’s some good news. Any turbulence should pass sooner or later. And you should even start seeing KPI improvements from your site.

However, if the hit has stuck

Say you saw significant impacts on your traffic and business, and they’ve lasted more than a couple of weeks. Then, it’s time to get some professional help.

An expert will identify the likely cause of the site’s problems and show you a strategy to put things right.

Book your no-obligation 30-minute SEO consultation at a time that suits you.

Stay up to date with David Rosam’s Digital Marketing Thing

Let me send it to you regularly so that you can stay up to date with Digital Marketing and my ideas about it right in your inbox.

Photo by Joshua Earle on Unsplash 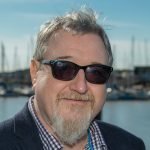 David Rosam has been working on the internet for 25 years, after a career in direct marketing copywriting for the tech and financial services industries.

Today, he specialises in Content-Focused Search Engine Optimisation—from audits, through research and strategy to implementation.

He was probably the UK’s first SEO Copywriter.

This website uses cookies to improve your experience while you navigate through the website. Out of these cookies, the cookies that are categorized as necessary are stored on your browser as they are essential for the working of basic functionalities of the website. We also use third-party cookies that help us analyze and understand how you use this website. These cookies will be stored in your browser only with your consent. You also have the option to opt-out of these cookies. But opting out of some of these cookies may have an effect on your browsing experience.
Necessary Always Enabled
Necessary cookies are absolutely essential for the website to function properly. This category only includes cookies that ensures basic functionalities and security features of the website. These cookies do not store any personal information.
Non-necessary
Any cookies that may not be particularly necessary for the website to function and is used specifically to collect user personal data via analytics, ads, other embedded contents are termed as non-necessary cookies. It is mandatory to procure user consent prior to running these cookies on your website.
SAVE & ACCEPT